I get a fair number of confidential phone calls and e-mails reporting coherent receivers unlocking due to very fast SOP transient events. These transients can be hundreds of thousands of radians per second, even over 1 million radians per second, within 10s of microseconds, followed by a slower relaxation in a few milliseconds. Such ∆SOPs in ∆ts are too fast for the coherent receiver’s DSP to track.

These events are seen on every continent with different fiber types and different vendors’ transmission equipment. What could cause these events? Surely this is too fast for mere mechanically induced SOP rotations. Perhaps the network is just trying to play games with you? (See below.)

But seriously, I would like to offer my hypothesis for the root cause of these ultrafast SOP transients and share a short literature search I did on the topic to support my customers and colleagues in solving this challenge.

Lightning strikes, or other electrical discharges, can affect the signal in the optical fiber in two ways. (Actually three if you consider cable and fiber damage.) Lightning induced electric fields, perpendicular to the direction of propagation in the fiber, induce a changes of the index in the direction of the E-field. This is known as the Kerr effect. Picture a vertical lightning strike (between sky and earth) near a horizontal (aerial or buried) cable. The vertically directed E-field increases only the index of refraction in one, the vertical, direction causing a sudden change in the fiber’s PMD. This effect only can occur in cables without metal surrounding the fibers which shield the E-field. However, the second lightning induced optical transient effect can occur in metal shielded fibers, specifically occurring in aerial Optical Ground Wire (OPGW). OPGW is a tubular cable structure created by a helix of steel and aluminum wires with optical fibers running through the center of the tube. When lightning strikes, currents are induced in the helical outer wires creating a magnetic field longitudinal with the light propagation in the central fibers. This longitudinal B-field causes a Faraday effect in the fibers rotating the optical polarizations. Summarizing, the lightning induced E-fields can cause ultrafast Kerr effect PMD transients, while lightning induced B-fields can cause ultrafast Faraday effect polarization rotation transients. So there is a basis to believe the observed ultrafast SOP transients, deleteriously affecting coherent receivers, depends on both the cable type and the weather. 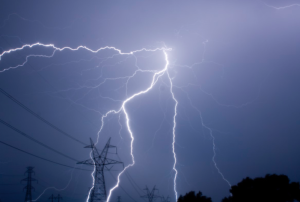 Below I have assembled a  short review of some of the literature I have found on the topic of ultrafast SOP transients due to lightning and electrical discharges. It seems the physical effects have been known for about 20 years.

This first paper is on lighting strikes on buried electrical cables (not fiber optic).  I start here as the authors report observed response times due to lightning of the order of tens of µs. This correlates with the time scale seen in dSOP/dt events.

Next, Sokolov theoretically describes how the polarization of optical signals are perturbed by the Kerr (electro-optic) and Faraday (magneto-optic) effects induced in an optical cable by lightning strikes on buried fiber.

In this paper Sokolov discusses transient PMD caused by lightning in buried fibers induced by the Kerr effect.

A couple other (referenced) papers by Sokolov in Russian (that I have not read).

Sokolov, S. A., “Features of polarization mode dispersion in optical cable with a wave seal from lightning,” Proceedings of the 1st Russian Conference on Lightning Protection, 111–114, Novosibirsk, Russia, Nov. 2007 (in Russian).

Third, I found simulations of Sokolov’s work into the Kerr (electro-optic) and Faraday (magneto-optic) effects induced on an optical cable made on direct detection WDM system. Supe and Porins find that polarization modulation formats are more sensitive than amplitude modulation.

But the most surprising papers come from Japan in the mid 1990s!

This 1996 paper is very early and seems to clearly predict the future and prophesize the problems we are experiencing today due to ultrafast SOP events in coherent optical communications. The abstract reads.

This paper describes a transient state of polarization in an optical ground wire (OPGW) theoretically, experimentally and with field measurements in lightning conditions, which is considered one of the fastest phenomena of polarization fluctuations in the natural environment. These characteristics will be required for optical coherent communication for utilities in future and for application to sensing of lightning with OPGW.

Again Kurono-san et. al. are at least a decade ahead of the rest. They correlate lightning sensors with the optical SOP events. They (1) observe large ∆SOP events, they (2) get the time scales correct, and they (3) show that lightning strikes within 60 km of the OPGW cable can affect the SOP. A link to a Japanese version of this paper is here. The abstract reads.

A second paper by the same group looked into the effects of lighting and electrical discharges on 10G NRZ transmission.

As we know there were no effects from lightning causing outages at 10G. But they mention that lightning induced Faraday effect caused SOP changes, but not birefringence or depolarization as expected from the Kerr effect.

These authors also looked to correlate weather events and SOP changes in fibers. They could not measure ultrafast events. Yet they concluded “Fast SOP fluctuations can be said to occur with large temperature gradients and extreme weather events (storms), thus the coming of fast SOP events can be predicted from weather forecasts

In conclusion we see that E-field induced PMD transients and B-field induced SOP rotation transient can be caused by lightning depending on the cable structure. These SOP events have been correlated with weather events. The time scales show a fast transient of order 10s of µsec filled by a few msec relaxation, just like the data we are  hearing about today in many locations around the globe.

New Ridge offers the world’s fastest polarimeter, the NRT-3000, with SOP state sampling up to 80 MSa/sec. Our SOP trigger mode allows the user to define both the ∆SOP and the ∆t windows for triggering on these ultrafast events. Logging mode allows the user to capture multiple events automatically.  Now that we have a hypothesis and symptoms of what is causing these events, we need to re-engineer the transponders and systems to make them more robust. New Ridge also offers  the NRT-2500 polarization controller. In Randomizer mode, the NRT-2500 can generate SOP jumps that have ∆SOP and ∆t values similar to lightning events 106 to 107 rad/sec over 10s of µsec (and its a lot safer that zapping you lab setup with lightning bolts).

I know that your data of these events is often sensitive. However, understanding and progress will be made faster through discreet sharing between members of the fiber optic community. I will be glad to post any data, from carriers or vendors (anonymously  or not) on my blog to help solve this issue. (But I am not holding my breath awaiting submissions 😉 )

Call or contact NRT for more information about our products or with comments on ultrafast SOP events.

3 thoughts on “Are Ultrafast SOP Events Affecting Your Coherent Receivers?”

This site uses Akismet to reduce spam. Learn how your comment data is processed.