The Internet of Things (IoT) market is huge, and has the potential to become even larger. Market reports and white papers from research firms, industry leaders, and government agencies worldwide have predicted different, but equally impressive annual revenues for IoT-enabled tech in the trillions of dollars. And with so many variations given to IoT—from analytics to industry—it’s one of the most “fertile grounds” for startup companies, especially those in the optics and photonics sector. Optics and photonics products—including sensors, optical fibers, LEDs, imaging systems, and lasers—are integral to IoT applications. 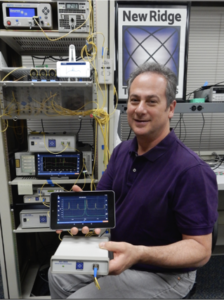 New Ridge Technologies is well-established in the fiber optic test and measurement market, known by customers worldwide for their sophisticated fiber optic test solutions. According to Henry Yaffe, founder and president of New Ridge Technologies, IoT offers new possibilities for the fiber optic test and measurement (T&M) market, which hasn’t changed much in the last 25 years. He says, NRT seeks to drive the cost out of T&M products,“by replacing bulky and expensive optics with new sophisticated optical components, also reducing size and weight. Further cost reduction is achieved by removing the built-in computer controllers. By replacing them with low-cost, ubiquitous, portable, smart devices, NRT enables a whole new world of IoT features and capabilities for free.”

Yaffe was one of five photonics company executives chosen to give a three-minute “pitch” to top equity investors at the OSA-partnered Plug & Play IoT EXPO in Sunnyvale, Calif., USA, in December 2015. Yaffe’s pitch was for New Ridge’s IoT-enabled NRT-8000 optical spectrum analyzer (OSA).

The market for New Ridge’s OSA includes fiber optic companies (e.g., telecoms, cable networks, undersea networks), as well as universities and developing countries where equipment price-points are very important. The first adopters have been manufacturers of fiber-optic transmission equipment who are currently using NRT’s compact OSA to lower manufacturing costs. Yaffe says that his IoT-enabled NRT-8000 is targeting the US$100 to US$200 million per year OSA market.

NRT-8000’s tagline is bold: “The world’s smallest fully functional OSA” includes built-in server-client Internet control for ease of use. But the company backs up their claim with some convincing statistics:

Yaffe says the instrument has gone from prototype to general release since the Plug & Play event. The company also upgraded the OSA including new features like an IoT T&M portal, multi-trace scanning and data-logging.

The initial roll-out of the NRT-8000 OSA received a lot of attention from New Ridge’s competition. “It’s a compliment,” says Yaffe. “Recently two competitors have announced their own compact OSAs, but not as much on the IoT side.” One of Yaffe’s competitors said New Ridge in effect defined the compact OSA as a completely “new OSA market segment”.

Yaffe says “IoT is still somewhat of a curiosity; our customers are figuring out how to use it: how it fits into their testing and their businesses. It makes a lot of sense to some, such as young engineers who are very comfortable using smart phones for everything. But for others IoT in T&M is a big departure from what they are used to. And naturally IoT raises concerns about the privacy and security, especially with government labs and security related companies. NRT is just getting going, and the IoT features will start to pick up as the deployments spread.”

written by Sarah Michaud (michaudedits@gmail.com), a freelance science writer based in Vienna, Austria.